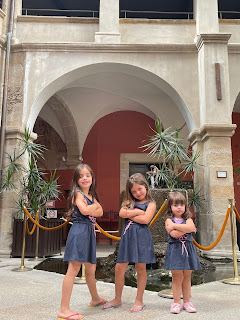 This is a follow up to my last blog about our trip to Extremadura, 3 hours to the north of Seville. While there exploring some of the monumental cities in the region we stayed in Trujillo in a hotel that was a converted monastery from the 16th century. One of the cool things that Jose and I have done a few times (hoping to do more in the future) is to stay in hotels which have been created in historic buildings. Here in Spain there are lots of options like castles or paradores where you can sleep in a unique place. Our hotel had a pool but unfortunately we could only go for an hour a day due to COVID restrictions. We took full advantage in the afternoons after spending our mornings sightseeing. The hotel also offered a good breakfast which is always a plus. Trujillo was the home of Francisco Pizzaro, the explorer, so of course the main square is crowned by a gigantic statue of him. We were pleased to find that there weren't many other tourists around and at some points it seemed we
Post a Comment
Read more 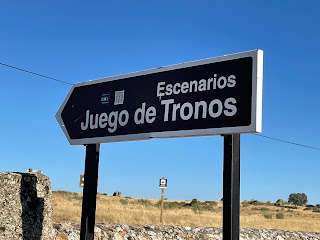 This past week Jose, the girls and I drove about three hours north of Seville to visit Extremadura, a region of Spain which was used pretty extensively in the Game of Thrones series because of its beautifully well-preserved architecture and natural scenery. HBO shot throughout Spain (including in and around Seville) during the series' run and it's easy to see why. Although we stayed in another city, we spent one day in Caceres which is famous for its medieval walled city that has been named a UNESCO World Heritage Site. We contracted a walking tour and braved the high temperatures to explore the many palaces, churches and stone streets found inside the Monumental City, several of which were used by GofT. I especially liked hearing about how the squabbles and fights between the city's nobility affected the architecture as they tried to outdo one another with family shields, balconies, towers and how one family financed changing the angle of the most famous arch so that a c
Post a Comment
Read more My littlest turned 2 last week. She's no longer a baby and she will tell you, "yo solita," which means "I can do it by myself." Carla may not be talking much yet but she has quite a personality and it shows. She wants to do everything her older sisters do, doesn't want to be left behind and she's very independent. I guess that's pretty common for kids that have siblings. Her birthday fell on a Friday so she celebrated at daycare first and then with us at home in the afternoon. She was pretty spoiled by her friends and family both here in Spain and from abroad. Thank you to everyone who sent gifts and well wishes. We appreciate all the messages and posts for our girl. The next day we had a small celebration with some of Jose's family in their village. Carla didn't have a first birthday party at all due to the pandemic. This meant that this was her first (second) birthday party and she had a blast swimming in the pool and playing with her cousi
Post a Comment
Read more 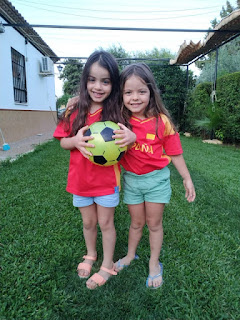 Eurocup soccer hopes ended for Spain in the semifinals in a match against Italy last week. Of course Jose has been following the national team's advancement through the tournament and admittedly there were some exciting games which went into the penalty phase (which is completely unfair in my opinion). But alas, his team neither won, nor could he convince any of his girls to share in his excitement. Maybe next time. Ok so I don't particularly like soccer (not football which is another sport entirely that I'm not interested in) but I do enjoy the social aspect of watching soccer when important games are on. It's like the Super Bowl. I probably don't know who is playing but getting together with people, eating food and "watching" is fun. The same thing happens here in Spain. One game we watched with my in-laws and another with some friends while our kids swam in their pool. I'm bummed for Jose that his team didn't advance but I also think the stress
Post a Comment
Read more Since we are without pool this summer and things are heating up we decided to make a Summer Bucket List with the older girls of things we can do, adventures we can take and places we'd like to visit. This weekend we hopped in the car and drove to  Júzcar in Malaga which is a couple of hours away. This small village with only 228 inhabitants wouldn't normally be on most people's list of places to visit until it was elected to become the Smurf Village in 2011 as part of a promotion for a movie release. The village later lost the rights to call itself the Smurf Village and now is known as the Blue Hamlet but that hasn't stopped the townspeople from maintaining the blue hue on all the buildings or the various Smurfs to be found throughout. The village itself is found after driving down a winding mountain road which was quite beautiful. The surroundings are gorgeous and it was about five degrees cooler in  Júzcar than back home which was nice. We had a walk through the town
Post a Comment
Read more
More posts

My name is Allie and though I am no expert writer, I am here sharing my experiences as an expat living in Spain. I like to think it is one part travel blog, one part diary, one part letter back home. This blog lets me keep in touch with the people I can't see or speak to everyday. Where is home? Michigan in the United States. Where am I now? Living in Seville, Spain. That's where the south comes from in my blog's name. I hope you enjoy my thoughts and my take on life in general. Feel free to leave comments or questions. Thanks for visiting.